by Zelda and the Unibrows 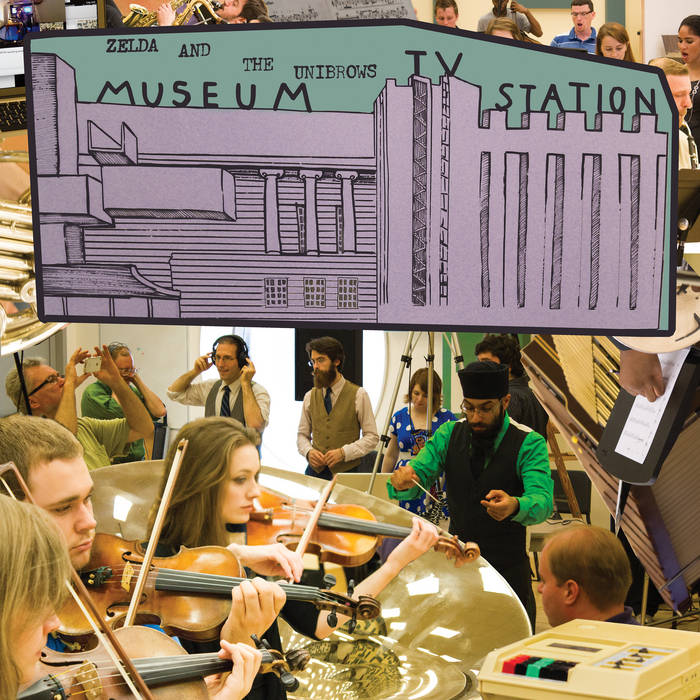 Lado Darakhvelidze is the mind behind Museum TV Station, and event he held for many years starting in 2010. MTVS features artists performing original works live over Skype to an ever-changing gallery location. Lado invited Zelda and the Unibrows to participate over Skype in 2011 and 2012 and in-person at The Kitchen in New York for 2013. Zelda and the Unibrows has always been a studio project, so playing live is not easy for us to do. A few of our performances were either singing over backing tracks or doing things live that would not translate well to a recording, but for the recordings presented here we assembled bands just to perform these pieces.

The first two tracks were rehearsed with Steve Kowalski and Dan Schnoblen of The Reelers, but there was an 11th-hour emergency that prevented Steve from performing live, and so Dustin Jones swooped in and saved the day at the last moment, learning his parts just in time to perform.

The year after the "Reelers" performance, Lado invited us to do the same again. Excited, I couldn't help but mention it to some musicians I had seen at Thistle Coffeehouse's open mic night, and one of them came back the next day and asked if I wanted to perform the music with an orchestra rather than a small ensemble.

Indervir Singh was about to graduate from the music program at Wayne State University and decided that this would be a good arrangement and conducting project, so we handed the MIDIs over to him to translate into playability.

We assembled a mostly-student, all-volunteer orchestra and film crew, showed up in the university practice room in the late morning, where Indervir had only two hours to present and refine his arrangements to people who had never seen it. After lunch, what you hear is what was performed live over Skype to Lado and a small audience watching a projection in Amsterdam. There were wifi issues, so what they heard was akin to the first Trans-Atlantic telephone connection and what they saw was a glitchy single shot, not the HD multi-angle presentation assembled later for YouTube.

I never thought that an orchestra could happen to Zelda and the Unibrows, but somehow one fell out of the sky thanks to Indervir's magic conducting baton and Lado's gallery savvy.

"I Like Food" was the first song ever created by Paul and Joe as Zelda and the Unibrows. The idea, dating back to 1996 when we were teenagers, was that this was the anthem of Big Fat Zelda, the fictional matron of Big Fat Zelda's Grease Barn restaurants and namesake of our band.

"Blissful Cessation"
The original version of this piece is on our 2012 EP of the same name. It features an excerpt of a Buddhist chant in the ancient Pali language, with its translation in English. We added in tape playback of Janina Pucenik, who appeared on our album "Neves-eatnouT", just because we were going out live to Poland and thought we may as well include some of the Polish language. We also like Janina. She was my grandmother's caretaker when she was ill.

"Pluffart"
This is the only track that I wrote on the "Happy Tape" album (or the first half of the "Greens" album, for those who have a compact disc). This, too, has tape playback of voices. These voices are excerpted from a cassette that I found at a thrift store in the early 2000s. Paul and I became so entranced with this home recording that we based an entire album around this found sound. Years later, Paul found a member of the family and returned the original cassette to them, so here we have a duplicate. Jeff and I then recite the contents of the playback. You know, just in case you missed it.

"Recordare"
Years ago Paul wrote sketches for a requiem mass, a project that was never completely fleshed-out. I decided to make my own version of this splinter of the work in 2012 as an electronic track for the "Blissful Cessation" EP, and it was only natural that this get a treatment by real musicians once the opportunity arose. Indervir smoothed out some of the musical edges in his arrangement, and it is perhaps the most serious that a band called Zelda and the Unibrows has ever sounded.

This release is dedicated in the memory of Dan Schnoblen.

Zelda and the Unibrows Detroit, Michigan

Zelda and the Unibrows is a quirky multimedia music project from Detroit. It has taken many forms over the years, including albums, videos, blogs, theatre and zines.

Zelda and the Unibrows recommends:

Bandcamp Daily  your guide to the world of Bandcamp

Benji B talks about his new compilation ‘Deviation Classics’